Some of the Australian animals are unique and different from others. In Australia, there is a list with a unique variety of animals. The best-known wild Animals in Australia are Kangaroo, Koala, Dingo, platypus, Emu, and Cassowary. There are more than 140 types of marsupials, including kangaroos, koalas,  wallabies, and wombats are living in Australia. The native species of kangaroos are varying best in size, weight, and uniqueness.

Australia is one of the most urbanized countries all over the world. There are so many different wild animals in Australia. Among the animal species found only in Australia are monotremes, which are mammals that lay eggs. The platypus and the two species of echidna are the only laying mammals in the world called Monotreme.

A very large number of the birds that live in Australia are found there only. Typical Australian bird species are Kookaburras, Emu and Rainbow Lorikeet, a particularly colorful parrot with a red beak and colorful plumage.

All wallabies are generally smaller than kangaroos, but kangaroos are of all sizes. Some weigh little and are small, others weight up to 90 kg. In many rural areas, kangaroos roam the bushes. Pebbly Beach is One of the best places to see kangaroos. It is in the south of Sydney Australia.

Koalas are marsupials and they are mammals that carry their child in a pouch. They look like small bears, but koalas are really not bears and not from bears families!

They are fragile animals and live in the eucalyptus forests on the east coast of Australia. Koalas can grow up to 80 cm high and weigh only around 14 kg. Koala babies are called joeys and hide in their mother’s pockets for the first six months. Koalas eat many eucalyptus leaves (1 kg per day). They sleep approximately for up to 20 hours!

Spend the night in hollow tree trunks or caves that are too narrow for predators. To protect yourself even more from predators at night, block the entrance with your very thick skin. Who uses your ass to move on.

Dingos are the largest carnivorous mammals living in Australia. The word Carnivore means eating meat. They occur throughout Australia, with the exception of Tasmania, although they are mainly inland. A dingo looks like a domestic dog but has a longer muzzle, larger pointed ears, and sharper teeth. It has brown fur and a thick tail.

Dingos are wild dogs and small animals are their main feed. A dingo is only the bulk of its life, but during mating season it is known to mix with other wild dogs and to hunt in packs of three to twelve animals.

Echidna is a different unique animal. It is also a monotreme that is only 40 to 50 cm long and weighs around 5 to 6 kg. Echidnas have thorns on their bodies, which are covered with a thorny layer like a porcupine or a hedgehog. The echidnas have a long, sticky tongue and feed mainly on insects. When they are afraid, the Echidnas become little balls to protect themselves.

The Tasmanian devil is an endangered animal and is only found in the wild on the island of Tasmania. It is marsupial and carries his young in his pocket. Tasmanian devils are marsupials and carry up to four descendants. Young is live up to four months in their pockets.

The Tasmanian devil, once seen in mainland Australia, can only be found in Tasmania. It plays an important role in the Tasmanian ecosystem by helping to control imported animals that take advantage of our native wildlife. It is the only native animal that successfully exceeds imported species, such as wild cats and red foxes. While the devil is near, wild cats and foxes have to trouble breeding in Tasmania. This is good news, especially for our native animals, which have a better chance of survival. For example, Fox Dens are very smelly and quite messy, so the devil can smell them quickly.

The animal dressed in black is the size of a small dog, but it is very shy and nocturnal. Nocturne means that the animal is active at night. Tasmanian devils are the largest carnivorous marsupials in Australia and They have powerful jaws and teeth.

One of the monotremes is the platypus. The animal in which the eggs are found lives in caves by the river. The platypus has a brown, hairy body and webbed skin. With a beak like a duck and a tail like a beaver, it looks really unique. A platypus can be up to 60 cm long.

It is a very shy animal and quickly hides underwater when you approach it. However, if they are attacked and cannot escape, they inject poison through spores in their hind legs. The poison is so strong that it can kill a dog!

This bird is the largest kingfisher in the world. It can grow up to 46 cm long! It is known for his laughter, which resembles human laughter. Kookaburras’ laughter is easy to hear and, therefore, can be seen. Listen to Kookaburra’s call here very easily.

Wombat is another native animal in Australia. This dredger can become very heavy. The weight of an adult up to 36 kg. Its generally 10-year-old weights!

Australian animals: Emu, Fauna of Australia, the emu is one of the biggest and tallest birds. It can reach a height of up to 2 m and can run very fast at a speed of up to 50 km. However, emus cannot fly like an ostrich. The emus feed on herbs and leaves, fruits and insects.

Their kicks are very dangerous, Emus defends themself with their strong kicks. Its name is derived from the Portuguese word “ema”, which means “big bird”.

About 5,500 great white sharks live along the Australian coast. The great white sharks are not the largest species of shark in the world, but they are impressive. They can be huge in size, up to 7 m long, almost half the length of a basketball court!

After a great white shark is fully fed, it can live without food for three months. For searching for prey sharks follow the vibrations of the water. White shark has a very good sense to detect smell and they can also smell blood about 4.8 km away.

The Australian jellyfish is the most toxic marine animal in the world. The box-shaped jellyfish has long tentacles that inject poison when touched. Dangerous tentacles are can grow up to 3 m long.

These jellyfish can swim, unlike most other jellyfish which can only swim. Therefore, make sure you are not in the water if warning signs appear during the summer season of jellyfish.

If they wait for prey, they can remain completely silent for an hour. When they hunt, they are half underwater or hide underwater. Crocodiles can hold their breath for approximately an hour and they have transparent eyelids to see their prey underwater.

The cassowary is another big size bird in Australia. A cassowary has its black feathers on the body. But the neck and face are very colorful. Cassowaries have a very low-frequency call that people can barely hear. The cassowary has a helmet, a helmet similar to a sponge, which is covered with keratin. Keratin is the material from which our nails are made!

The cassowary is the most dangerous big bird in the world because it has the strongest kick. The foot has three fingers and a dagger-shaped claw. You can run and swim very quickly, so you can easily escape from any dangerous moment.

Some of the most venomous snakes in the world, such as the coastal taipan, are found in Australia. Other dangerous Australian snakes are the Inner Taipan and the Tiger Snake. The coastal coastline can reach 4 m long.

However, don’t worry too much when you encounter snakes in the wild. Snakes want to be alone, they only attack when they feel threatened.

The funnel-shaped spider very dangerous and is the deadliest spider in the world. The funnel spider injects a deadly poison if it stings and death occurs within an hour. However, a poison has developed and there have been no deaths in more than thirty plus years.

Australian peoples are very aware of the danger of being bitten by a funnel spider. Therefore, they take precautions when walking in the bushes or when working in the garden. Large black spiders have no hair and the web looks like a huge funnel, so it’s hard to miss it! On the Sydney coast, you can see networks between the marbles and the rocks. 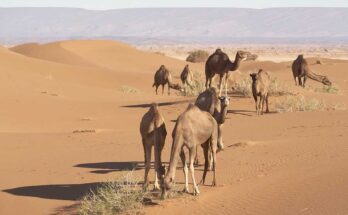